Can you dream about the future? Do precognitive dreams occur?

To investigate your ability to dream about the future, the IASD Psiber Dreaming Conference invites you to join our Precognitive Dream Contest. In this event, participants try to dream about a target picture before it is randomly selected from a pool of over 100 images stored on a computer.

Since IASD’s first PsiberDreaming Conference in 2002, participants have been enlisting their precognitive skills to dream of a target that has not yet been selected. Below you can read about the Precognitive Dream Contest rules.

How the Precognitive Dream Contest Works

Participants follow the instructions below to try dreaming ahead of time of a target picture that will be randomly selected on Sunday, October 1, 2017. All entries must be submitted the day before, no later than midnight Eastern Daylight Time (9 PM PDT), on Saturday, September 30.

The hosts will then review each entry. “Precognitive Dream Champs” will be announced on Tuesday, October 3.

1)  Print these instructions and take them to bed with you on Friday, September 29.

2)  Make sure you place a pen and paper or other recording device within easy reach of your bedside.

3)  Read over this paragraph at bedtime and make these ideas your intent:

I am requesting information from my dreams. Tonight I will have a dream of the target picture that will be posted on Sunday, October 1, 2017. I will waken with the dream fresh in my mind. I will remember the dream imagery easily and experience the contest target clearly. I will be able to understand the target picture in the same way that I will when I see it later on my screen.

4)  Repeat these instructions to yourself as you fall asleep.

5)  Record your dream memories as soon as you wake up, even if it’s the middle of the night. Be as descriptive as you can. If you record more than one dream, please give each a number.

6)  Post your dreams before midnight, Eastern Daylight Time (9 PM PT) on Saturday, September 30. If you prefer not to post your dreams, e-mail your entry to Cynnie at netcadet@mycci.net by the deadline.

7)  You may use your own name or a pseudonym, but do provide us with some means of identifying you.

The target of the 2016 Psiber Dreaming Precognitive Dream Contest, selected randomly from a pool of over 200 images on October 2, 2016. This features a detail from a famous painting of Napoleon’s coronation of himself in Notre Dame Cathedral, but with a surprise — TV personality Richard Simmons, manic diet guru, screams from the sidelines: 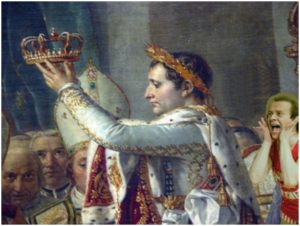 The target of the 2015 Psiber Dreaming Precognitive Dream Contest, a 19th century painting called “Spartan Boys Practicing Archery,” was selected randomly from a pool of 225 images on October 4, 2015: 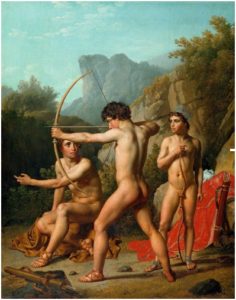